Installation with scent. 2012, “The Nature of Things” at the Garden Education Center, Greenwich, CT

In “On The Nature of Things,” Lucretius combines his conjectures about the workings of the physical universe, including some fancy guesswork on the olfactory system, with psychological and political observations that are still relevant today. Writing around the time of Cleopatra’s birth, just before the Roman Republic transitioned into an Empire, Lucretius shares his perspective on the human dilemma during a time that has been described as “an age of desperate and bloody self-seeking on the part of the few.1” Reading the poem two thousand years later, it appears that the fundamental fears and ambitions of human beings have changed very little since then. Consequently, people of his era and ours share many of the same impediments to a sensorial and intuitive experience of the world.

Stop and Smell the ____ is an enquiry into how we assess the nature of things. How do sensory perception, intuition and expectation influence our interpretation of the world around us? When a rose no longer smells like a rose, what happens to our internal model of “rose”?

The scent in Stop and Smell the _____ uses ingredients similar to those in Myrtum Laurum, a balm found during the excavation of Cleopatra’s (69 – 30 B.C.E) perfume laboratory at En Boquet, near the Dead Sea.

Excerpt from Titus Lucretius Carus, On the Nature of Things Book III, under “Folly of the Fear of Death”

The man who sickens of his home goes out,
Forth from his splendid halls, and straight- returns,
Feeling i’faith no better off abroad.
He races, driving his Gallic ponies along,
Down to his villa, madly,- as in haste
To hurry help to a house afire.- At once
He yawns, as soon as foot has touched the threshold,
Or drowsily goes off in sleep and seeks
Forgetfulness, or maybe bustles about
And makes for town again. In such a way
Each human flees himself- a self in sooth,
As happens, he by no means can escape;
And willy-nilly he cleaves to it and loathes,
Sick, sick, and guessing not the cause of ail.
Yet should he see but that, O chiefly then,
Leaving all else, he’d study to divine
The nature of things, since here is in debate
Eternal time and not the single hour,
Mortal’s estate in whatsoever remains
After great death.

Excerpt from Avery Gilbert, What the Nose Knows: The Science of Scent in Everyday Life

In Portugal years ago, I was eating dinner at a pousada, an old castle refitted into an elegant restaurant and hotel. At the next table was a tall, elderly American, his wife, and a Portuguese gentleman. The tall fellow looked familiar; with a bit of eavesdropping I realized it was John Kenneth Galbraith, the economist and diplomat. At the end of the evening Galbraith followed his guests from the dining room. He paused before a large bouquet of red roses by the door, stooped down, and took a long, contemplative sniff. Here was a guy of impressive achievement who actually did stop to smell the roses. 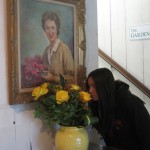