This is speculative. For now.

Disease detection: Dogs (and in some cases humans) can detect the cellular change caused by disease via the resultant odors emanating from human subjects. Diabetes, Parkinson’s, cancer, seizures and covid19 are all currently detectible by trained dogs.  Sometimes even pre-symptomatic diagnosis is possible. Dogs are currently detecting Covid infections with a 94.5% accuracy rate at the Dubai airport.

E-noses can also detect some of these cellular changes at the molecular level, and compared to current diagnostic procedures, will in the future be providing less invasive, an`d more accurate and cost-effective diagnoses.

Learning from perfume: In perfumery there are two attributes related to the power of a scent: longevity and sillage. How long after applying is the scent detectable on the skin? What radius does the scent disperse to when applied? With perfume, maximizing both is often considered positive.

Why skunk: A skunk’s odor will last 14-21 days if left on its own. And it becomes harder to remove if you wait. A skunk can spray 10 ft and a human nose can detect the odor 3.5 miles downwind.

There is a “skunk” odor that has been manufactured for use by police and military, used primarily to disperse crowds. Similar to natural skunk, it requires specific chemicals to be neutralized. The manufacturer sells a special soap for this purpose. On the plus side, it is eco-friendly and non-toxic!

In Dogs Detect, Skunks Protect, several dogs form a detection perimeter around a person or place, testing anyone who enters that perimeter for covid19. The dogs show an “alert” posture when they detect a positive result. This posture, which can be low key (sitting, looking back) or more threatening (bark, pawing) is detected by a camera-enabled “skunk” drone that delivers a spray of skunk water to anyone who has tested positive. In the future the dogs may be replaced by e-nose enabled drones, but for now trained dogs are the only option for real time test results. Training a dog in disease detection and alert behavior is costly (approximately $25,000 per dog).

The long-lasting skunk scent, with its extensive sillage and repulsive odor, turns the sprayed individual into a pariah for 2 weeks, not only insuring they are denied access to the person or place that initiated the testing, but more or less forcing them into quarantine. 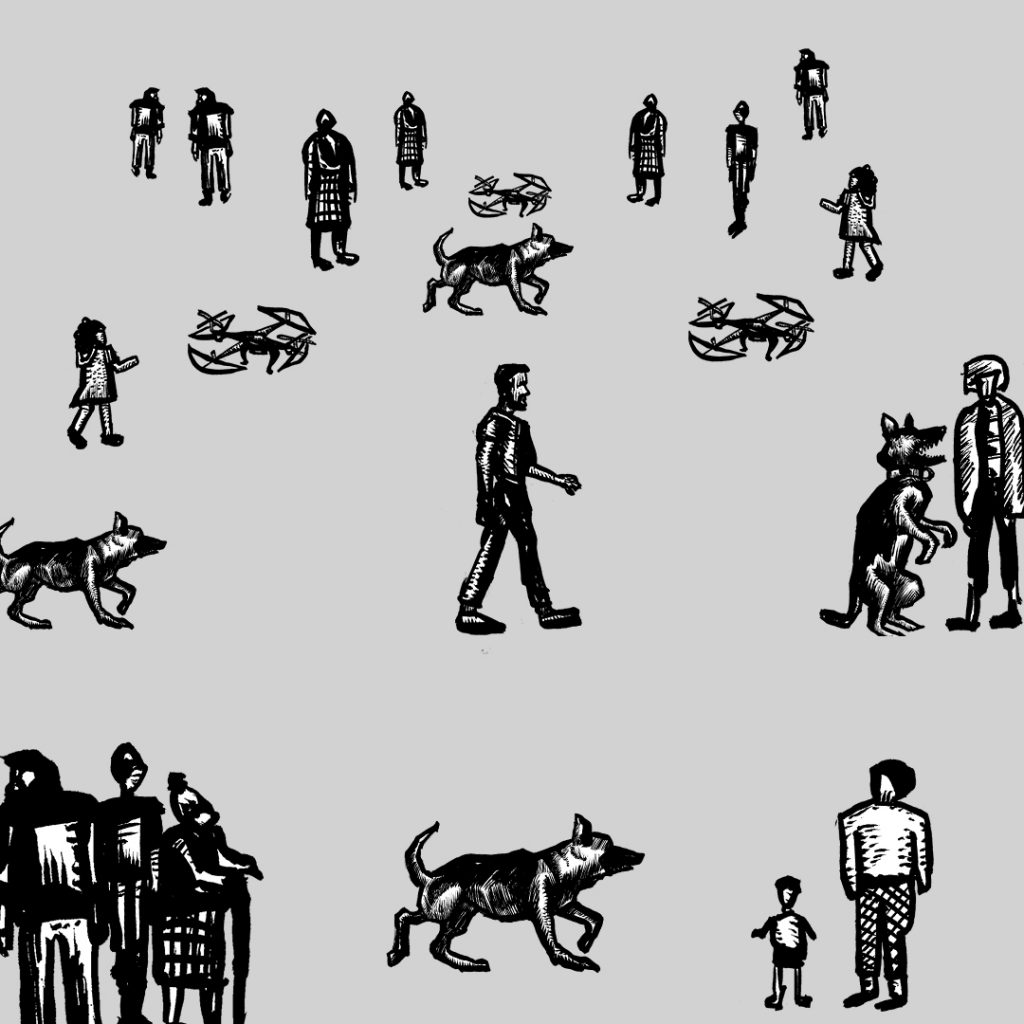 1. Rich person / hero / heroine wants to move around NYC (or other densely-populated city) in complete safety. They purchase or lease highly trained dogs and skunk drones to protect them from covid19 infection. Eventually city hall monetizes this behavior, and sells the right to employ the Dog Detects, Skunk Protects system within a defined radius. (larger radius = more$$). This protects the individual but also can be viewed as a public service, since everyone nearby gets free covid19 testing. Anyone who walks outside, at any time, risks smelling like skunk for 2 weeks. 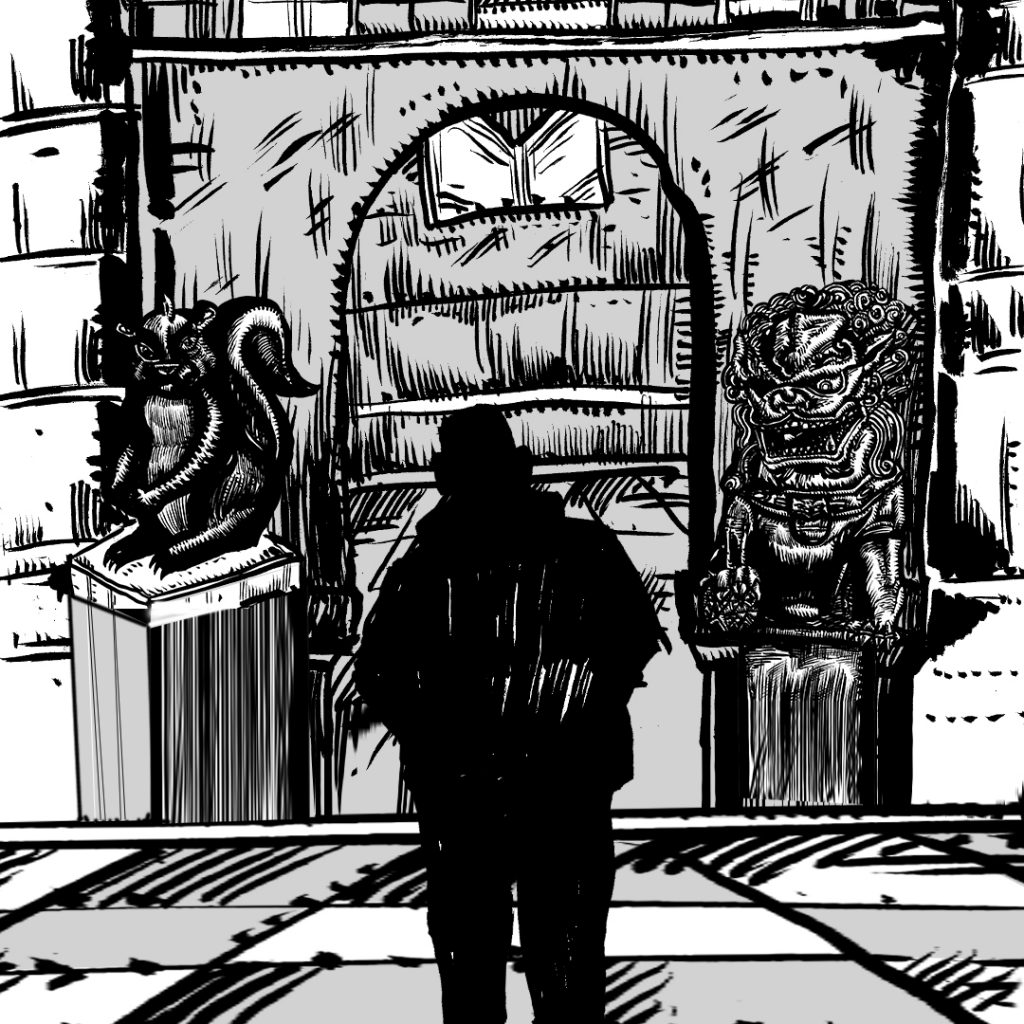 2. Public park, private club etc. At the entrance to any venue, the traditional paired male and female Chinese guardian lions or foo-dogs are replaced with a live dog or e-nose enabled foo-dog replica, and a skunk replica housing the same scent dispersion technology used in the drones. Entrance is predicated on passing the dog smell test. If covid19 is detected by the dog, the individual gets sprayed with skunk scent. The foo-dog’s historical functions continue into the future: to portray wealth and power, and to protect a building and its inhabitants.

Japanese adaptations of the guardian lions portray the male as inhaling, representing life, while the female exhales, indicating death. The menacing appearance is what conveys the idea that these statues have the power to keep evil at bay. Because of the high cost of making the statues, the presence of these lions was also associated with wealth.

The female Foo Dog is said to protect the inhabitants of the home or building while the male watches over the property and structures. Female goes on left as you face the building. The male holds a small ball which represents the world. The female keeps watch over a cub or puppy, and is said to represent life and nature. Here we have the dog or drone inhaling the scent of humans seeking entrance to the venue. The female lion, or the skunk, exhales to mark those who are denied entrance due to covid19 infection.

From Biosensors 7 December 2017
Inspired by the sensing mechanism of the mammalian olfactory system, medical devices known as “electronic/artificial noses or tongues” (e-noses, e-tongues), containing biomimetic cross-reactive sensor arrays (B-CRSAs) have been developed to detect specific olfactory (smell) and gustatory (taste) elements present in both vapor and liquid samples, respectively. The analyte mixtures represent specific pathological profiles, and these B-CRSAs have proven to be successful at diagnosing a wide variety of pathologies, providing cost-effective, minimally invasive, and highly accurate analyte profile analysis and classification.

America Is Running Out of Bomb-Sniffing Dogs