At Home with Fox and Beaver

Here in Westchester County, beavers and foxes share their home territory with dogs and humans. The dogs frequently encounter fox or beaver scat, and on especially lucky occasions they find a castoreum-rich beaver scent-mound to lavishly roll in. So when dogs and humans return from a walk, fox and beaver often travel into the house with them.

My dogs seem overjoyed by these smelly encounters, but what they are really feeling and experiencing isn’t accessible to me. If I could drop and roll in poop to find out I probably would, but the exercise would be doomed to failure. “At home with fox and beaver” acknowledges this gulf in olfactory experience. In their encounters with natural fox and beaver products, the dogs are registering a multitude of aroma molecules and, in some dog-like way, processing complex olfactory data. The odors are not distasteful to them, but seem instead to be exciting and informative. In contrast, the scent “At home with fox and beaver” includes only a small subset of the aroma materials produced by foxes and beavers, substantially reducing complexity and allowing for a scent that humans can judge as relatively pleasant.

This gulf in olfactory sensibilities might be a metaphor for the separation that humans have created between themselves and the other animals that we share the planet with. But considering this gulf can also be a step towards better understanding other species and behaving more responsibly towards them.  Perhaps we could strive to be at home not just with dogs, but with the foxes and beavers, and all manner of living beings.

Laura Peters is the amazing artist behind the custom clay enclosure.

The piece was created specifically for the show New York/New Fumes at Olfactory Art Keller, an exhibition described by Andreas Keller as “experimental scents by the new wave of New York-based scent artists. Contributors include trained perfumers as well as visual artists and musicians who creatively engage with scents. Each of the 21 artists contributed a single new scent (or in one case a pair), many of them in unique containers designed by the artist.” 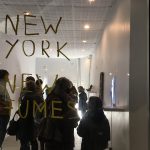 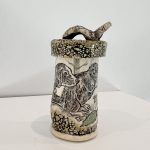 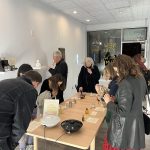