During the first half of the 20th century, Adams was a thriving mill town, and 93 Summer Street housed a successful department store. The store’s impressive wooden cabinetry and street-level display windows are now part of the Greylock Arts gallery space. As if substituting for the role the store once played in the life of the town, the owners of the gallery have prioritized the concerns of local residents and the larger Berkshire community in choosing the projects they have initiated both inside and outside of the gallery.

When Greylock’s owners asked me to participate in the show “LEDs Are Pretty,” I wanted my contribution to reflect positively on the town of Adams, to incorporate something of the building’s history, and, well, to be pretty. With their 24/7 presence in the windows, the chandeliers also had the benefit of constant accessibility.

Comparing the two chandeliers they can be seen as old-fashioned versus modern, dark versus light, or pre-established versus organic. The juxtaposition of these two, as well as the materials employed, imply a transition in values. Whereas the value of the chandelier has traditionally been associated with luxury and its handmaiden, excess, the trendiness of the highly efficient LED is indicative of a new attitude – one in which we accrue status through consuming less. But once combined with the ubiquitous cable tie, can the chandelier maintain its status? Does it still signify luxury and wealth? Can it still be valued otherwise? 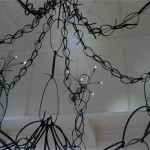 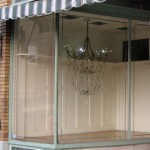 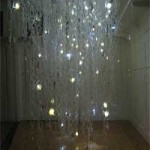 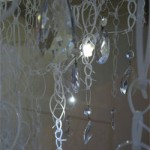 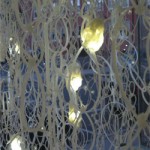 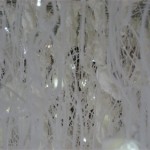