Installed at ArtSpace New Haven, Dirt occupied Gallery 5, which was scented with a synthetic perfume that smells like dirt. A soundtrack of Walter de Maria performing the drum solo “Cricket Music” played in the evenly-lit but otherwise empty gallery.

Dirt references both Walter de Maria’s “Earth Room” installations (1968 – 1977) and Robert Morris’ Dirt (1968), two seminal pieces that engage anti-formal and conceptual strategies in a critique of Modernist aesthetics and a shift away from the mathematical rigidity associated with Minimalism.

By exploiting the perceptual dissonance inherent in a clean white room smelling like dirt, Dirt attempts to make visitors aware of their own act of smelling and of the influence that olfaction exerts, often behind the scenes (i.e. outside of conscious awareness). The installation also engages with social constructs around cleanliness, naturalness, and filth. Because a “dirty” clean white room is considered anomalous, the installation implicitly asks us to question what is dirty. What is it that we name “dirty” and what is it that we feel is “dirty.”

Moreover, the installation challenges the hegemony of vision in current art practice and also asks visitors to consider the meaning and function of smell in a world where odors are synthesized and not necessarily indicative of, well, anything. 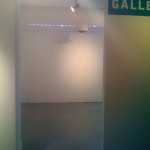